When I was thirty-two years old, I was mugged.

With ten years of city life in Chicago under my belt, a genetic disposition toward calculated risk (a ticker tape of pros and cons runs in a continuous loop through my head), and a fairly acceptable amount of caffeine flowing through my veins, I raced out the door one muggy summer morning to power walk a few short blocks and sign my son up for baseball. This was during the Mesozoic Era, or pre-electronic enrollment, and I knew I had about a twenty-minute window to make the line before all spots would be taken, thereby denying my son the necessary foundation to learn to hit a ball off a tee, which was an absolute must if he was ever going to claim his rightful spot in the Cubs starting lineup.

That’s the inside of my brain. Image via addamsfamily.com

Apparently, everyone else in my neighborhood had older kids, no kids and were therefore hung over, or happened to be White Sox fans, because on that particular morning, the street was deserted.

A couple of blocks deep into my line of sight, I noticed someone walking toward me: brisk pace, slumped shoulders, hoodie half-covering his head. He kind of resembled one of my favorite guest stars from 21 Jump Street, but not one of the good guys. More than any fictional character, though, he looked like someone who didn’t want to be seen.

Having intentionally exposed myself to a ridiculous amount of 80s trivia-caliber crime shows growing up, I was immediately on guard. But I also had time to think, which, as fate would have it, ended up being a big mistake.

As the sketchy figure approached, I debated the voice inside my head that, at this point, had busted through my ticker tape and was jumping up and down against the inside of my cranium, screaming at me to cross the street.

This is my sixth sense busting through my internal ticker tape of logic. Image, via fandomania.com, not to scale.

Sixth Sense: “Hey. Are you, like, awake or what? There’s only one other person in the entire city of Chicago who’s outside right now, and he happens to be walking toward you. He doesn’t appear to be stumbling home from a walk of shame and he’s not dressed in a suit carrying a bible. In fact, he looks kind of scary.”

Conscience: “I see him.”

Sixth Sense: “Right. Perfect answer, because he’s now about a block away, has yet to look up so you can see his face, and appears to be roughly twice your size.”

Conscience: “I realize that, but you don’t know what he’s about any more than I do.”

Sixth Sense: “I don’t need to know. I can feel who he is, and on a scale of 1 – 100, I’d guess somewhere in the “absolute certainty” range that he isn’t someone who wants to be your friend.”

Conscience: “Listen, I’m not jaded like you. In case you haven’t noticed, ever since 9/11 there’s been a lot of misguided profiling in this country, and I don’t buy into false labels. I’m standing my ground.”

Sixth Sense: “You’re asking for it.”

Sixth Sense: “You’re smarter than this.”

Conscience: “You’re better than this.”

At this point in my two-sided internal monologue, the partially hooded man walked quickly by, only lightly brushing my shoulder as he passed.

“See?” I said to myself, smug and satisfied as the stranger circled back, and with a rapid-sequence series of moves that could only be the work of a Ninja or a professional thief, attempted to rip my arm off from behind. Because it was attached to my purse. 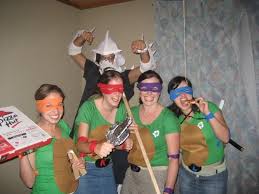 None of these ninjas mugged me. Image via travelblog.org

Now, since I’d already done such a fantastic job of following the logical, subconscious direction dictated by a vocal minority of my brain, I proved to be equally awesome at thinking on my feet. I did exactly what every cop, teacher, and after-school special tells you not to.

As he grabbed, I flexed. When he pulled, I hung on, pitting us in a five-second tug-of-war that felt more like the time it would take to tread water through a football field of quicksand in a pair of Christian Louboutins.

Finally, my strap broke, he grabbed my purse, and sprinted away. I ran in the opposite direction, but not before stopping to pick up my wallet, which had fallen to the sidewalk during our fight.

In the end he stole a 37” Samsonite Comfort Travel umbrella, a list of people who had sent gifts to my newborn daughter, and some thank you cards. I have no idea who was on that list, but now, ten years later, if you sent a present and didn’t hear from me? I’m truly sorry, but it wasn’t my fault, so please stop ignoring my friend requests.

Although I’m attempting to highlight the humor as I tell this story, my experience was the exact opposite. It was horrendous. I suffered from insomnia for months, pacing the floor in my bedroom as I played, replayed, and overplayed the virtual Rubik’s Cube combination of decisions I could have made that day but didn’t, not to mention the potential outcomes. I know there are countless people who’ve been in similar situations with worse results. In the end, I was lucky.

Getting mugged isn’t exclusive to my gender. I have male friends who’ve been robbed (and thankfully not shot) at gunpoint, which has to be a harrowing experience. But when a man enters a woman’s personal space, uninvited and intending harm, it’s a violation that’s difficult to shake, with a magnitude of future influence that’s even harder to define. The physical odds are beyond unevenly stacked when it comes to defense, and the moral implication behind the intent has the potential to be, and often is, life-changing.

And that’s why I think women have developed a 6th sense. Because we need it.

Women often try to be everything to everyone else, paying little attention to our own inner voices. We’re a nurturing gender, and want to believe, sometimes contrary to the preponderance of evidence presented, in the power of good.

I made a big mistake.

A couple of hours after I was mugged, the police officer showed up to file a report, and told me there was a series of shootings that morning about ten blocks from my house. They happened earlier, and all involved robbery. Was it the same guy? I’ll never know. They didn’t catch him. But I’ll always wonder.

When your 6th sense tells you to do something, listen. I didn’t, and I was fortunate to get the chance to try again.

44 thoughts on “Never Ignore The Little Voice Inside Your Head.”